GLF Schools was founded in 2012 in order to enable the federation of Glyn School (an academy in 2011) and Danetree Junior School. Together, we began our journey to become a MAT of more than 1000 talented staff working with over 10,000 children in 40 schools across 5 regions in southern England. 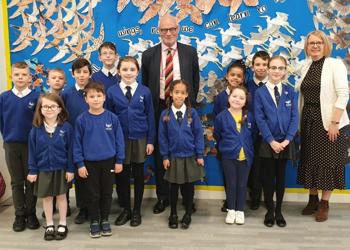 We welcomed local MP, Crispin Blunt, to Salfords this week for his first school visit in two years. Mr Blunt thoroughly enjoyed his visit and was extremely interested in what the School Council had to say and the diverse range of questions they asked him.

Mr Bunt told our children about his job as an MP and his own personal journey. He explained that it is his duty to represent the views of the people of Reigate in Parliament and he listens to local residents on subjects such as local services, shops, transport and schools.

He spent his childhood in Germany as his Dad was a soldier and went to boarding school in Hamelin – just like the Pied Piper! When he was growing up he wanted to be a soldier and he spent his early career in the Army before changing direction to be an MP, as he liked being able to support people. He said that when he was younger, he liked the idea of a battle and now as an MP he battles with other’s opinions! He will celebrate 25 years as an MP on 1st May 2022.

The School Council had the opportunity to question Mr Blunt and asked questions about politics, his career and what he does in his spare time. He is a big cricket fan, supports Chelsea football club and it is probably no surprise that he is interested in current affairs as the news is, “on a lot and comes with the territory.”

Ramsey asked a thoughtful question about the current war in Ukraine and Mr Blunt shared the historical background of the USSR and past World Wars along with complicated UK and USA agreements.

Super sleuth Ava had discovered that Emily Blunt is Mr Blunt’s niece and asked him if he has been in any movies. He replied that he hasn’t although he has been on TV and that “to be in politics is like TV for old people!”

As he left Mr Blunt congratulated our co-headteachers, Mrs Christer and Mrs Regnard on their leadership and the progress that Salfords has made, which he said is a true testament of their commitment and hard work.

An Academy within GLF Schools

Each of our schools has its own distinct character and culture which is respectful of its community and context but their utmost common ground is that it is our staff that make each school.

Salfords Primary School is committed to safeguarding and promoting the welfare of children and expects all staff and volunteers to share this commitment.